The electronic management of the flow of materials along the entire Supply Chain leads to an improvement in performance, to the elimination of the dangers of stock-outs and reminders

The magic of fire. And the magic of an entrepreneurial success: from a simple artisan workshop to an industry with a turnover of 14.5 million Euros. This is Cadel S.r.l. , manufacturer and distributor of wood-burning kitchens, wood-burning stoves and pellet stoves. Over 19,000 pieces produced in 2011, a production system distributed over three plants and strongly integrated throughout the transformation process, one of the most modern sheet metal processing technologies, materials and high-level design.

KanbanBOX has been supporting Cadel in managing the flow of materials along the entire production chain since 2012. After a short initial phase of testing, focused on setting up the flow of semi-finished products between the internal carpentry and the rest of the production areas, the i-cloud software was extended to the entire Supply Chain: from external suppliers to assembly lines, up to the finished product.

More than 2,200 components are managed with KanbanBOX among the internal production areas, and more than 800 purchase articles. Over 50 strategic suppliers access the platform, sharing information about the status and sizing of kanbans and collaborating on the replenishment of the Cadel supermarket.

We talked about it with Engineer Schena, Operations manager of Cadel: “We chose KanbanBOX to have an IT tool able to exploit the strengths of visual management, without the weight related to the maintenance and management of a traditional card system.  Today at Cadel we manage 2,500 kanban ties for in-house production items and over 800 for purchased goods“.

Between internal and external suppliers, every day there are over 250 kanban cards whose barcode is read.

The activation of an electronic kanban has drastically reduced the time and cost of starting production of items managed on a kanban basis. In some cases, the stock of class A components has been reduced by up to 50% beyond what has already been achieved with a manual kanban.

The implementation of KanbanBOX has made it possible to achieve performance improvements in the internal operations of the resources involved in the Kanban management of the flow of materials: from the production manager to the material planner, up to the warehouse workers and operators of the various production departments.

If in production the activities necessary for sizing, printing of cards and issuance of manual kanban were around 20 minutes, with the implementation of KanbanBOX the time is less than 2 minutes.

Maintenance has become, in equal measure, less burdensome and demanding. Until 2011, the kanban code set was scaled down twice a year, at the beginning and end of product seasonality, with the active involvement of at least three resources: the material planner, a warehouseman and a foreman.

Now, thanks to KanbanBOX, kanban maintenance is carried out continuously and by a single resource, the material planner, with scaling that is also released twice a month. Thanks to the “disposable” electronic kanban system, the downsizing activity no longer affects the operations of production operators and warehouse workers.

In the procurement department, the first positive consequence was the drastic reduction in the time spent managing external suppliers and errors. The role of the planner of external materials (editor’s note – a role already optimised thanks to traditional kanban management), was switched from a purely operational role of recall and reminder, to a role of optimisation of the number of kanbans, with the plus of being able to supervise the increase in rotations, reducing financial exposure. 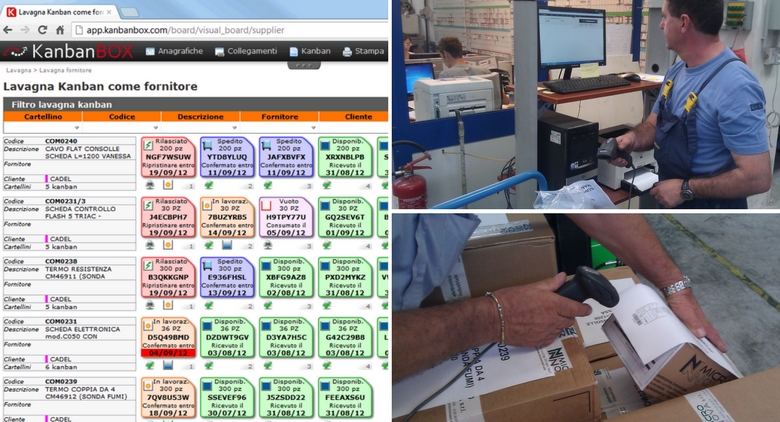 The virtual whiteboard allows you to have more control over the work of suppliers and to monitor the progress of orders in real time.

KanbanBOX now allows a transparent and complete view of the status of stocks, simplifying the management of communication with suppliers and in fact cancelling reminders: both parties can, at any time, monitor the status of the warehouse (Supermarket) on the shared electronic whiteboard.

Finally, thanks to the software, the identification of dangerous stock-out situations was made timely. The result: in a few months, a tangible reduction of 25% in the number of line stops compared to 2011.

And for the future? “In Cadel we expect to achieve an improvement in department performance and a reduction in circulating stock, thanks to the statistics available to the user that give greater vision on the state of affairs.

We then want to activate periodic and automatic maintenance of the sizing of the kanbans through the budget for the following quarter for the various product models, interfacing our management software with KanbanBOX”.