sustainability and innovation, on the move

Aptiv PLC is a global automotive component and mobility technology company with its headquarters in Dublin, Ireland. The company is focused on high-tech electronics and software for the next generation of driverless vehicles, data management, automated mobility on demand (AMoD) transport systems and development of fully autonomous ride sharing solutions, as well as technologies for production cars.

A future full of challenges, therefore, also inspired by the philosophy of continuous improvement, which we discussed with engineer Marco Morganti, Continuous Improvement Manager in the Italian headquarters of Aptiv, located in Turin, and Giuseppe Imbimbo, the Operation Manager.

The Turin division is entirely dedicated to the production of connectors for the automotive industry. Since 2015 KanbanBOX is the Supply Chain Management tool used for the electronic management of kanban materials in production and handling, implemented after a Lean Transformation path that has seen the entire Group engaged since 2008. Giuseppe Imbimbo, formerly Group Lean Manager at European level, is the person who managed both the Lean Transformation operation and the adoption of KanbanBOX as an electronic kanban management software.

From a Push management to a Pull, elimination of the warehouse, introduction of the kanban method: in 2008 the Turin plant was involved in a global Lean Management initiative.

An accelerated path, which has integrated, over time and with many goals, the main kaizen tools, in a fluid and not fragmented perspective of change. In fact, Lean Thinking is an organisational paradigm that first of all requires a change of mentality and that must be implemented as a whole, paying more attention to behaviour than tools.

“That’s exactly how it is” Morganti told us. “In Aptiv we decided to experiment with the important transition from a push to a pull type system starting from a pilot project, limited to some machines and in specific departments. We implemented a traditional Kanban system using hard-copy cards, which corresponded to a production order to be entrusted to internal suppliers, thus moving from a production managed for large batches to one for small batches. As in a usual Kanban loop, the generation of the production order was activated by the emptying of a container in the Supermarket warehouse. After filling the kanban container, it was returned to the consumer station or the pieces produced were made available again in the Supermarket. Without the receipt of a kanban signal, that is, a production order, production would not be activated”. 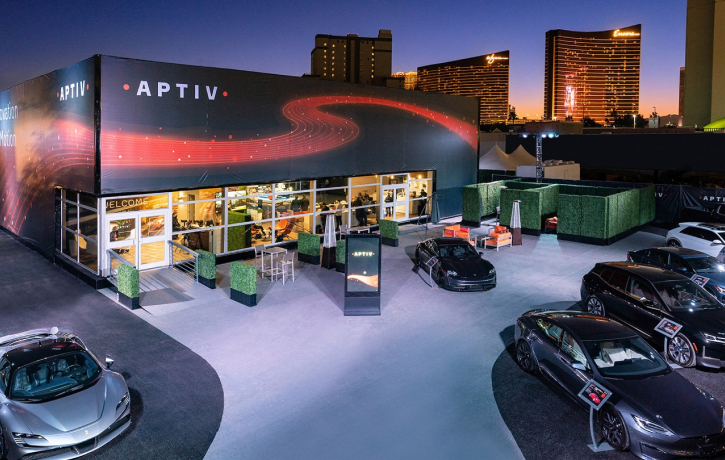 KanbanBOX is immediate, visual, easy to implement, to understand and to use. All this has great value!

It should be emphasised that the choice to implement a pull production system is a real challenge for the sector, especially when compared to the world industry average. In fact, a type of product with high set-up costs of plastic moulding machinery, high production volumes and low prices usually prefers a management system based on the push approach, in which the integrated vision of all production and supply is lost in favour of a segmented vision of the production flow. That is, a departmental logic is favoured that aims to optimise single operations at the expense of the overall reduction of stocks.

In the current economic and social context, on the other hand, speed and flexibility make the management of production processes very complex: despite the stimuli that come from Lean Management theories and the benefits deriving from 4.0 technologies, for many companies it remains difficult to overcome the Tayloristic-Fordist model of production they have developed. However, the organisational paradigm of a lean manufacturing company should be pulled from the market (Pull Supply Chain Strategy) and based on management by flows and not by homogeneous processes. 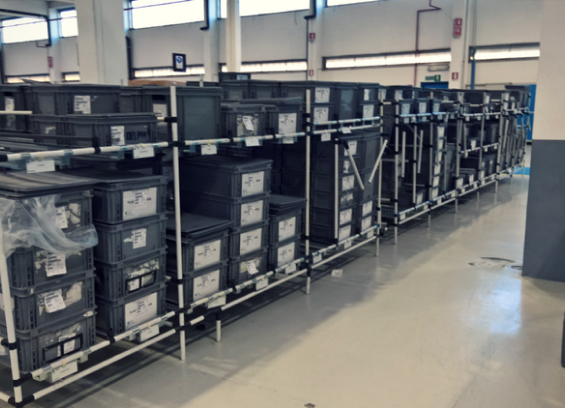 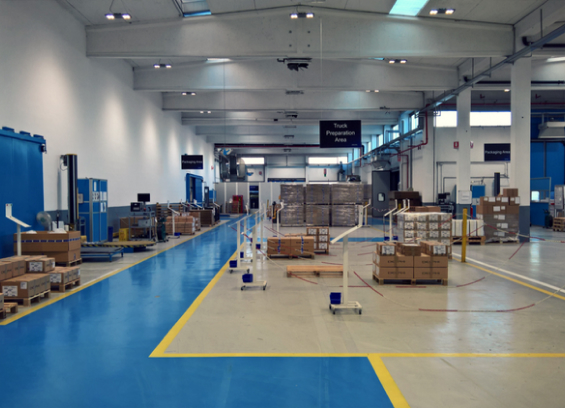 In Aptiv’s corporate vision, Lean Production has always been a highly strategic objective: “The elimination of stocks has always been a declared goal and, in fact, thanks to the kanban system the value of the warehouse, previously settled around 3 million Euros, has reached an average value of about 700 thousand Euros”, continued Morganti.

What were the main benefits

Morganti: “In addition to the reduction of stocks, there have been many others. It should be emphasised that the efficiency has not been reduced at all, in addition we achieved

Did you encounter any negative aspects?

Morganti: “Let’s say that the system was as efficient as it was complicated and difficult to coordinate because we managed about 150 thousand hard-copy kanbans. As can be seen from the numbers, the difficulties were not only recorded in the high incidence of human error, but also in the excessive use of time and resources spent in the management of the system. The need to switch to the use of an electronic kanban system was becoming increasingly stringent”.

Imbimbo: “The application of manual kanban was extremely complex. That’s why I personally started looking for a more advanced tool to manage the system. In the meantime, the plant had also become mature to carry out a more technologically advanced step”.

Is this when you found out about KanbanBOX?

Imbimbo: “Yes, I got to know the software through an experiential training course on Lean Management, Officina Snella. The transition to electronic management was easy and natural. As Marco said, we have implemented a pilot phase, very well received by the plant: now all the production workers use KanbanBOX”.

Morganti: “The transition was easier and leaner than we expected. This is, in my opinion, the beauty of this software: KanbanBOX is immediate, visual, simple to implement (the implementation took place in just 3 months), to understand and to use. All this has great value: a correct implementation requires not only the right amount of discipline, but also and above all a simple tool. This is demonstrated by the speed with which even new resources, sometimes without previous experience in lean environments, learn to use it!”

So you didn't encounter any difficulties with the implementation of the web software?

Morganti: “I will say something unpopular: difficulties, if there are any, are always mental, they never belong to the software. Often people tend to blame their mistakes on technology, while the truth is that it simply highlights hidden problems, which perhaps they prefer to ignore. However, all these difficulties can be overcome by working on human capital, also thanks to the support of KanbanBOX assistance: this is demonstrated by the fact that no one would ever think of returning to the previous manual management, which is now obsolete!”

It creates a paradox whereby seeing the problem seems to generate the problem. Conversely, the use of an electronic system allows bringing the hidden problems of manual management to the surface.

What were the practical benefits obtained using KanbanBOX?

mbimbo: «Logistical advantages of warehouse management and production organisation. In the present day we produce exclusively on order. KanbanBOX also provides useful information for the maintenance of the system and the sizing of internal warehouses: you no longer have to make calculations by hand!”

Morganti: “I confirm, thanks to KanbanBOX the lean management of the production process has significantly lower costs: just think that the resources used in maintaining the process have dropped from nine to six after the introduction of ekanban, thus recovering three resources for activities with greater added value. The main improvement provided by the e-kanban is that everything is centralised. The planning department directly manages orders and the software provides comprehensive reporting of orders made in production, sequences and delayed orders”.

How are orders managed?

Morganti: “At Aptiv we use two applications of the kanban system: one for production, so that the latter is always in line with customer requests, and one for handling, for the standardisation of internal logistics and picking routes”.

In short, the entry of products into production is not anticipated with respect to orders, and production is regulated by the downstream stages of the production process. In this system, each department in the chain sees the downstream department as a customer and the upstream department as a supplier. In Aptiv, the planning department manages customer orders, organising them on the individual cells of the assembly department consisting of 18 machines, each of which has a stock of components sufficient to cover an hour of work. The order pulls the production from cell to cell, and thanks to the e-kanban system, creates as few stocks as possible, allowing the optimisation of the total crossing time. The consumption of materials in the Kanban Supermarket on board the assembly line generates the order to the plastic department, in charge of producing the components that need to be assembled.

Morganti: “The emptying of kanban materials in the assembly department, and the consequent request for replenishment, become production orders, visible on the KanbanBOX electronic whiteboard, continued Morganti, in a sort of system that self-generates and self-regulates, without the risk of loss of cards and, indeed, providing visibility on the work completed and work that still has to be completed. In addition to levelling the workload within the departments, we also saw a significant benefit for logistics and material picking personnel. In fact, the handling of materials takes place only after the actual consumption, which is always the same and predictable over time: the activities borne by the warehouse workers are spread over the entire working shift, making their work cycle standard and reducing physical effort”.

Imbimbo: “In 2015 we also introduced kanban for levelling the workload, so-called Heijunka. An absolute novelty, so much so that the module was made specifically for us by your developers. This is another strong point of the software: its possibility of customisation thanks to the development of real additional tools. This ability to understand, interpret and solve our needs is the added value of KanbanBOX, which derives directly from the people behind the product: management engineers with a lot of experience in Lean Manufacturing, who therefore know the application sectors and the internal problems of companies”. 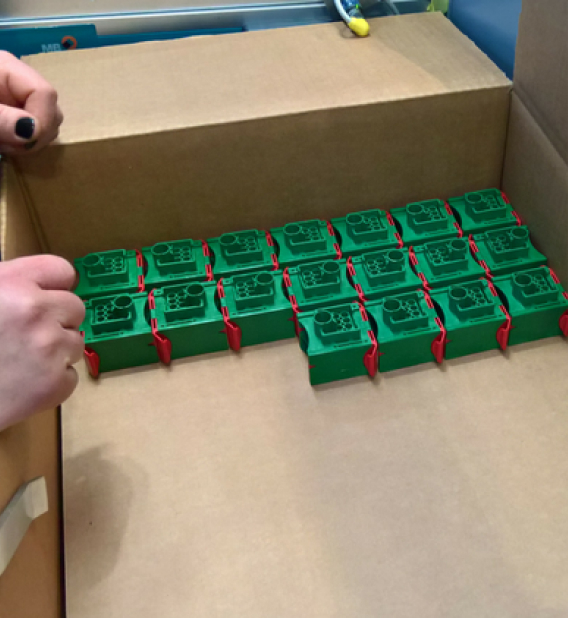 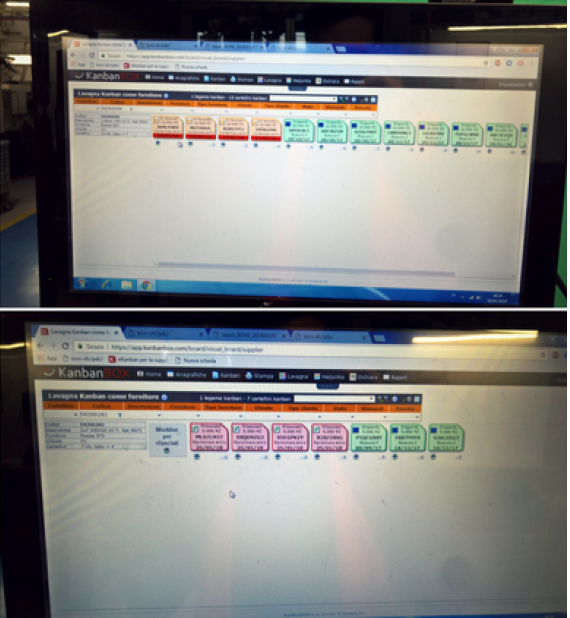 Now, to improve the system and completely eliminate the incidence of human error, given the high volumes of materials handled, Aptiv is developing in partnership with KanbanBOX a project from an Industry 4.0 standpoint that uses RFID technology for radio frequency reading of the cards, to eliminate the hardware devices for reading kanban cards. The project involves the installation of card reading gates for fixed and mobile workstations on board the machine, in the two departments, and in the warehouse, with the involvement of some customers.

The combination of electronic kanban and RFID technology is able to optimise the Pull management of materials and the replenishment of the Supermarket, coming to provide a complete automation of the flow and the elimination of hard-copy labels. In fact, the RFID identification system opens new perspectives in automation techniques and, in addition to complete and real-time visibility of the flow of materials, allows you to plan and control processes with precision and efficiency, arriving at complete automation!

The platform for management of electronic kanbans